In 2010, Colby College received a bequest from artist Bernard Langlais’s widow, Helen Friend Langlais, of thousands of her husband’s artworks and the couple’s 90-acre property in Cushing, Maine. Kohler Foundation, Inc. of Wisconsin purchased the property from Colby College, who in turn gifted the Foundation over 2,900 artworks by Langlais. A private foundation that funds preservation initiatives centered on art environments and collections, Kohler undertook the monumental task of conserving Langlais’s works and placing them in non-profit institutions in Maine and beyond. Over fifty institutions in more than forty Maine communities now hold artworks by Langlais.

The wooden “Skowhegan Indian” sculpture, located in the municipal parking lot off Madison Avenue and High Street, was commissioned by the Skowhegan Tourist Hospitality Association in 1966, and as Langlais intended, was “dedicated to the Maine Indians, the first people to use these lands in peaceful ways.” It was erected in 1969 in observance of Maine’s 150th anniversary and is a popular stop on the Maine Langlais Art Trail. It was later gifted to the Skowhegan Chamber of Commerce. 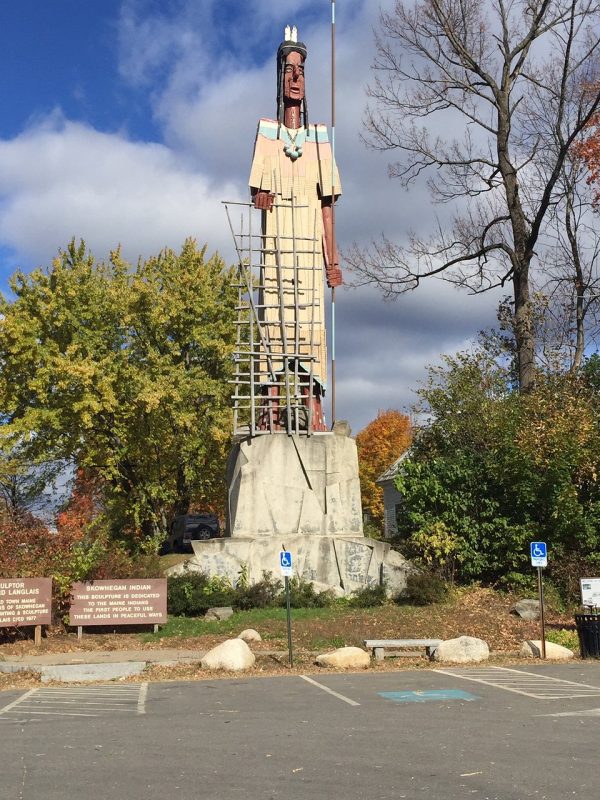 The wooden “Skowhegan Indian” sculpture, located in the municipal parking lot off Madison Avenue and High Street, was commissioned by the Skowhegan Tourist Hospitality Association in 1966, and as Langlais intended, was “dedicated to the Maine Indians, the first people to use these lands in peaceful ways.” It was erected in 1969 in observance of Maine’s 150th anniversary and is a popular stop on the Maine Langlais Art Trail. It was later gifted to the Skowhegan Chamber of Commerce.

The sculpture, 62 feet high, sitting on a 20-foot base, and weighing in at 24,000 pounds, is of a Wabanaki fisherman holding a spear in his left hand and a “weir” (fish trap) in his right. It is made mostly of white pine and its strength comes from two steel I-beams anchored in the concrete base that extends up inside the sculpture to the sculpture’s shoulders. The wooden exterior effectively hangs off the steel structure. It is the tallest sculpture of its kind in the world, and of his many pieces, this is one of the few that still remains where he put it, which is very important to art investors, foundations, and art historians.

By 2004, 35 years of Northern Maine weather had taken a toll on the sculpture. An engineering study was completed and some emergency preservation work was executed. But the structure was still in danger. In 2010, funds were raised, and a larger restoration project was undertaken. Stephen Dionne, a builder, woodworker, and restorer from Skowhegan, was hired to oversee the project. The goal was to stabilize the sculpture and leave as much of the original piece alone. But significant rot, rust, and insect damage was discovered and ultimately, major surgery was required.

The hands and feet showed the worst wear and had to be replaced. The interior diagonal brace was broken and had to be fixed. They also removed bird nests, cleaned the base, stapled screening to the underside to keep out critters, applied a special solution to the legs and feet to deter further decay, replaced rusted bolts and flashing, and installed stainless steel guy wires to stabilize the structure. The entire sculpture then needed to be repainted. To stay true to the original, they sent paint samples to a Virginia conservator for analysis so that they could match Langlais’ pigments. The sculpture was rededicated in September, 2014 after a 4 year restoration project.

Who was Bernard Langlais?

Both a student and a teacher at the Skowhegan School of Painting & Sculpture during his lifetime, Bernard “Blackie” Langlais (1921-1977) was a prolific artist known for his impressionistic folk-art style and oversized sculptures made from scrap wood and found objects. Bernard Langlais was born in Old Town, Maine, and showed an early proclivity for drawing. He left Maine after high school to study commercial art at the Corcoran School of Art in Washington, D.C. He earned scholarships to the Skowhegan School of Painting and Sculpture and the Brooklyn Museum Art School, as well as a Fulbright Scholarship to study the paintings of Norwegian artist Edvard Munch in Oslo. Working in New York in the 1950s, Langlais developed a modernist painting style characterized by landscapes and still lifes with bold colors and flattened perspectives, while also experimenting with hard-edge abstraction and painterly expressionism.

In 1956, while renovating his summer cottage in Cushing, Maine, Langlais was captivated by working with scraps of wood, which he arranged to create a mosaic-like wall composition. He termed the process “painting with wood” and emphatically abandoned oil painting to explore this new medium. His abstract wood reliefs immediately caught the attention of the New York art world and were included in the watershed exhibition New Forms–New Media at the Martha Jackson Gallery in 1960, in a solo exhibition at Leo Castelli Gallery in 1961, and at the Whitney Museum’s 1962 Drawing and Sculpture Annual.

Despite his commercial success, by the mid-1960s Langlais became disenchanted by the pressures of New York gallery culture. Interested in working on a larger scale, he purchased a farmhouse in Cushing and moved permanently to his native state. In the last eleven years of his life, he constructed more than sixty-five monumental wood sculptures on the land around his home, including his best-known commission, the over seventy-foot-tall Indian for the town of Skowhegan, Maine. During this period he also produced a massive oeuvre of two- and three-dimensional works exploring the patterns, textures, and expressive powers of the animal kingdom.

Complementing Langlais’s iconic “Skowhegan Indian” sculpture, in 2013 Main Street Skowhegan received 24 sculptures from Langlais’s Cushing, Maine, estate; 21 are currently on view in public locations throughout town. These pieces provide an opportunity to experience a critical mass of Langlais artworks in one area. Residents and visitors are welcome to visit the various sculptures throughout town.

Click here for a PDF of a brochure mapping all the Langlais pieces on display in Skowhegan.